Getting engaged? After something a bit more glamorous than the standard engagement ring?

Well, you might not be a royal or celebrity, but proposing with a ring inspired by one of these will have them feeling like a true superstar … Guaranteeing you a “YES!” 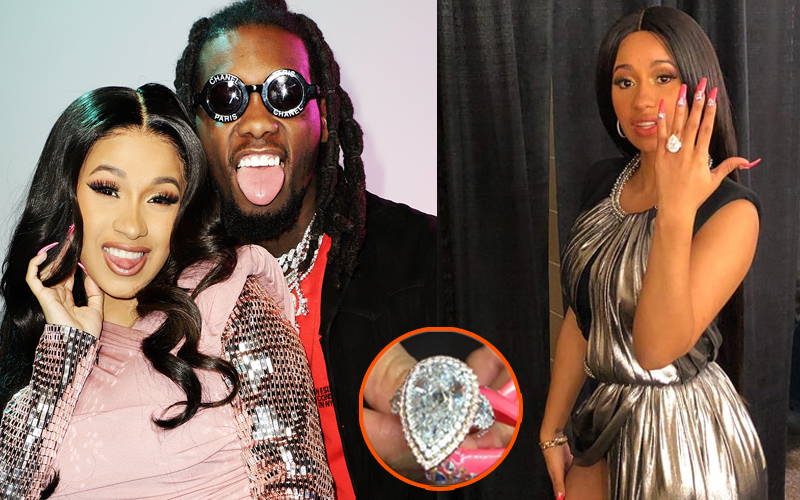 The ring - An 8-carat pear central diamond, surrounded by a 2-carats double halo of diamonds, with a 1-carat pear stone either side. Set on either a white gold or platinum band.

The proposal - Just hours after the ring was made, Offset proposed to Cardi B in front of a crowd of fans at Power 99’s Powerhouse concert. But the twist was that they’d already been secretly married for 3 weeks. Despite this, Cardi B flashing the custom made engagement ring on Offset’s Instagram story almost broke the internet.

Tip for proposing to a Cardi B fan - The inner halo ring is entirely clear diamonds, while the outer ring is pink diamonds. Pink diamonds are so rare that less than 0.01% of all diamond carats mined are quality pink diamonds. And they add the perfect feminine feel. 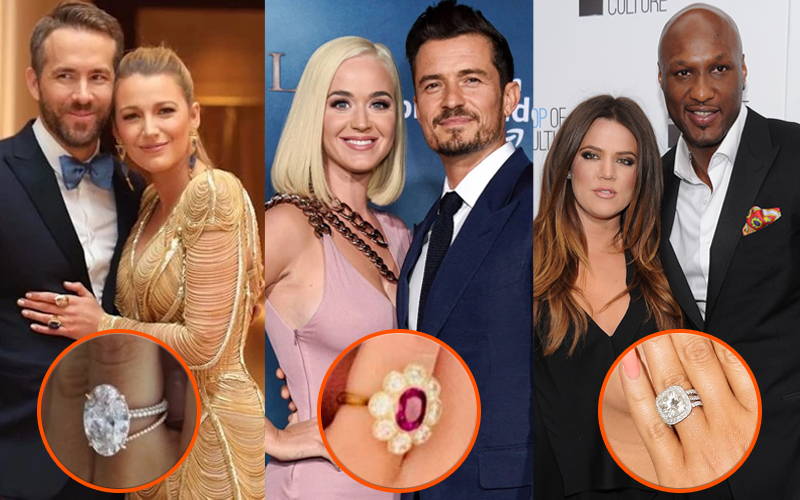 Katy Perry - Orlando Bloom - A 2-carat oval ruby, surrounded by a diamond halo of 2.5-carat clear diamonds, set onto a yellow gold band in the unusual shape of a flower for the estimated cost of $5 million. 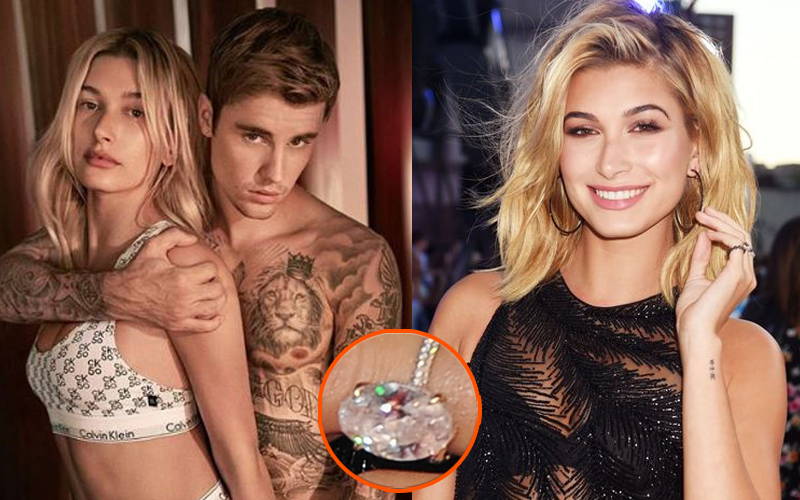 The ring - Solitaire oval diamond, reported to be somewhere between 6 to 10-carats, set onto an 18-karat yellow gold band.

The design - A solitaire oval diamond, exceptional in its length, was chosen to accentuate Hailey’s beautiful hands. With videos sent to his team, Bieber oversaw the making of the hefty ring.

Tip for proposing to a Belieber: On its completion, when looking into the diamond with a loop (magnifying instrument), Bieber apparently said he saw Hailey’s face … A fact that probably scored him a few romantic points. 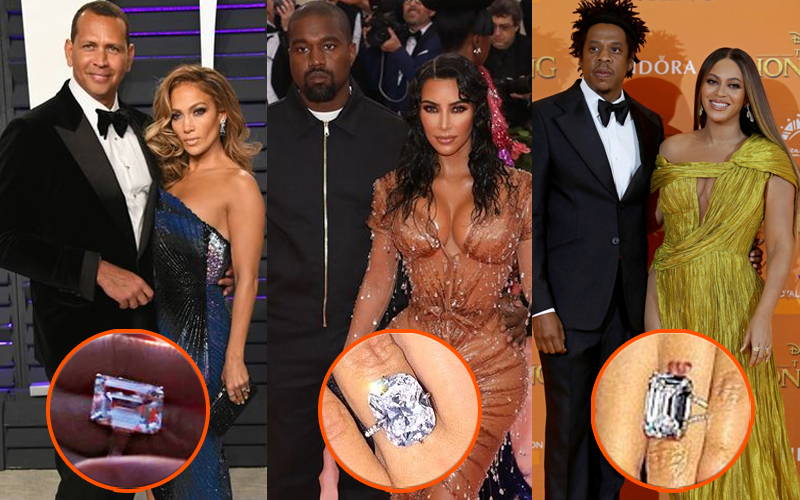 J-Lo - Alex Rodriguez - A solitaire emerald diamond, estimated to be anywhere between 10 to 20-carats and $1-5 million.

Kim Kardashian - Kanye West - Kim’s first engagement ring from Kanye was a 15-carat cushion solitaire diamond set onto a pavé band. Estimated to be up to $3 million. 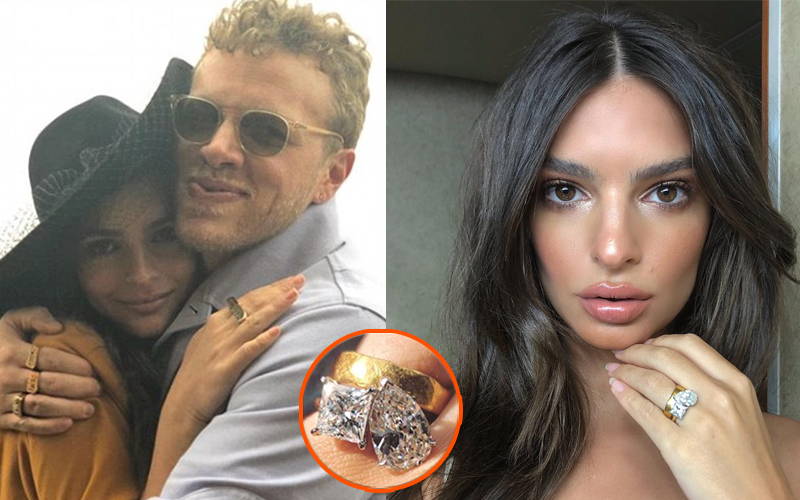 The ring - A 2-carat princess diamond, paired with a 3-carat pear diamond on a gold band.

The proposal - He might have used a paperclip for the proposal, but Sebastian upgraded Emily’s engagement ring to a unique two-stone stunner. For their wedding rings, they found a bar of gold in Chinatown, New York. Then went in search of a jeweller who melted and hammered it into two bands in Midtown, the same night.

Tip for proposing to an Emrata fan - If you want a more DIY style engagement and wedding ring, like Emily, we offer a bespoke service where you're supported and involved in the design and every decision throughout the journey. 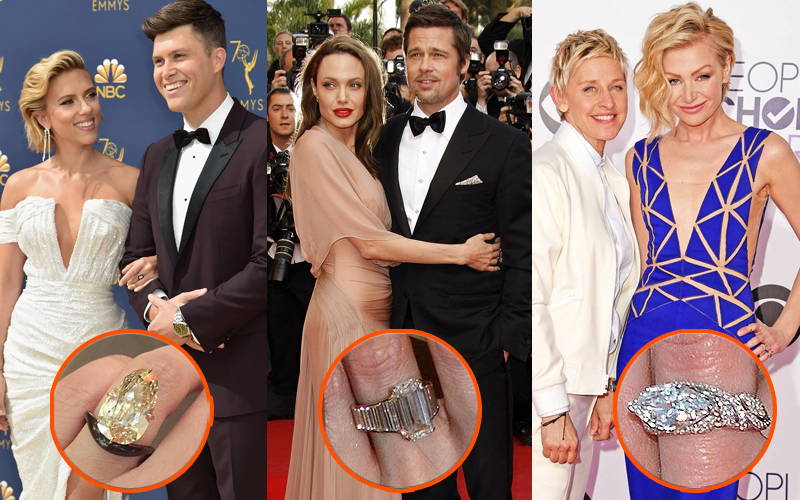 Angelina Jolie - Brad Pitt - Costing $250,000 and a year to be designed. An emerald center stone with trapezoid side diamonds extending down both sides of the band to encircle Jolie’s finger. 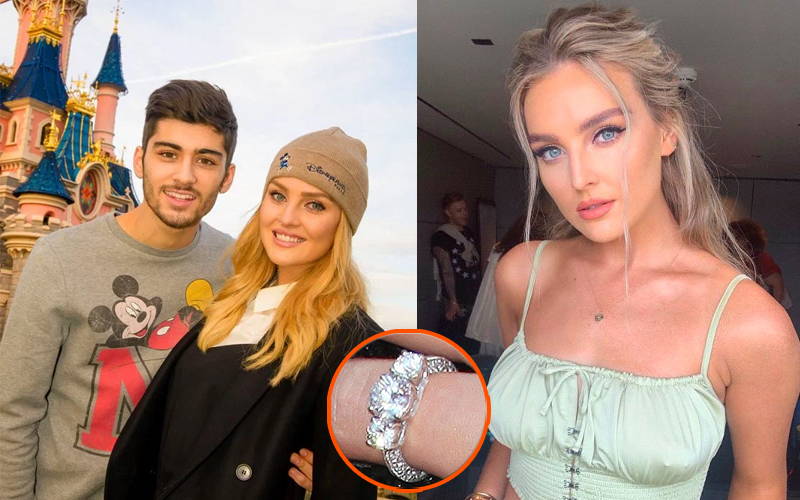 The ring - A 2.5-carat round brilliant diamond with a smaller 0.75-carat on either side. Secured by a traditional 4 claw setting onto a milgrain band.

The couple didn’t make it down the aisle, but this trilogy ring is still one of our favourites for inspiration. The mixture of a timeless design with a vintage style band adds a unique twist. 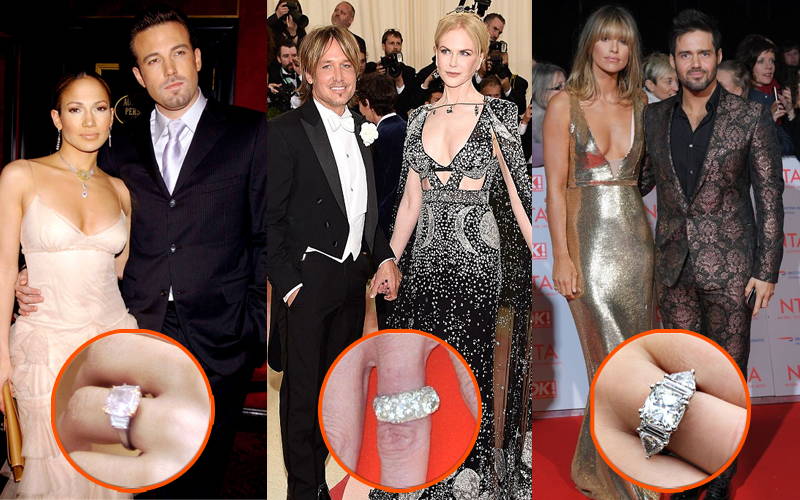 Vogue Williams - Spencer Matthews - Thought to be 4 to 5-carats and worth £150,000, Spencers' inspiration for the ring design came from Vogue's love of bridges. 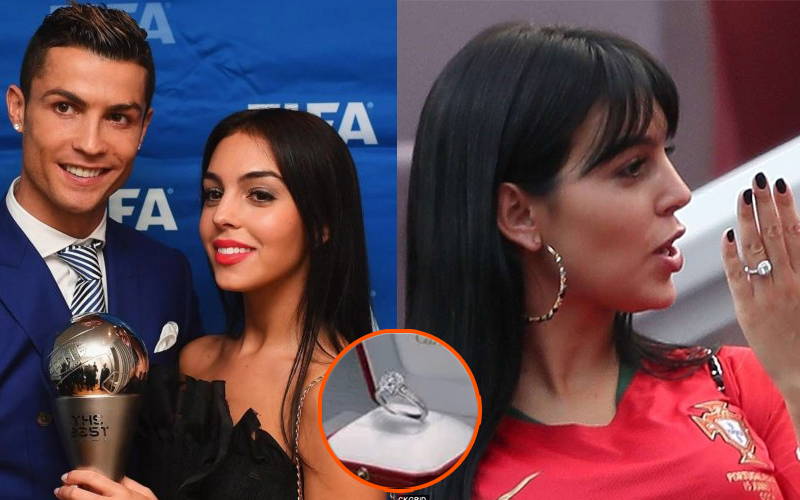 The ring - An emerald solitaire diamond.

… That’s pretty much all we know. 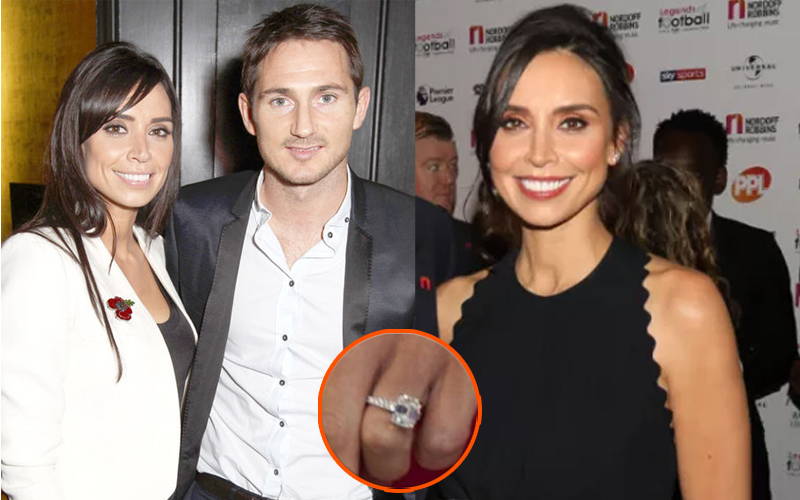 The ring - A round brilliant solitaire clear diamond, set onto a platinum band with clear pavé diamonds.

The proposal - Chelsea manager Frank Lampard spent 3 months planning his proposal to TV presenter Christine Bleakly. Even flying his friend out to L.A ahead of them with the ring in order to keep it a secret for when he popped the question. 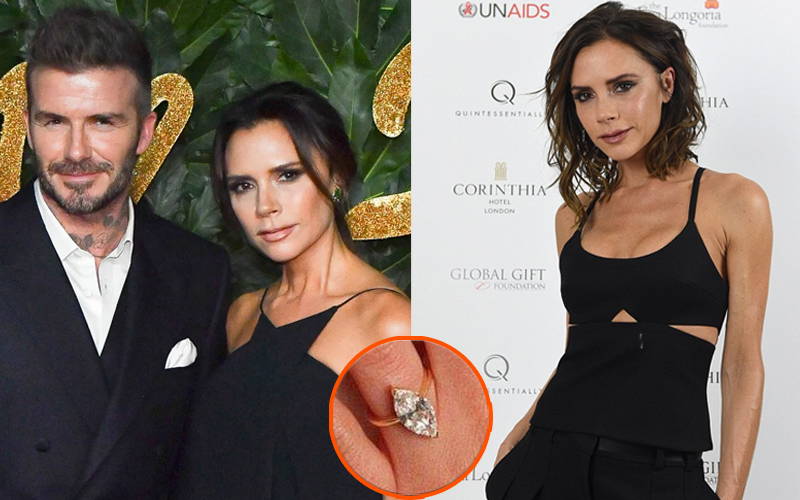 The ring - A 3-carat marquise diamond set onto a yellow gold band. David proposed with this beauty in 1998. 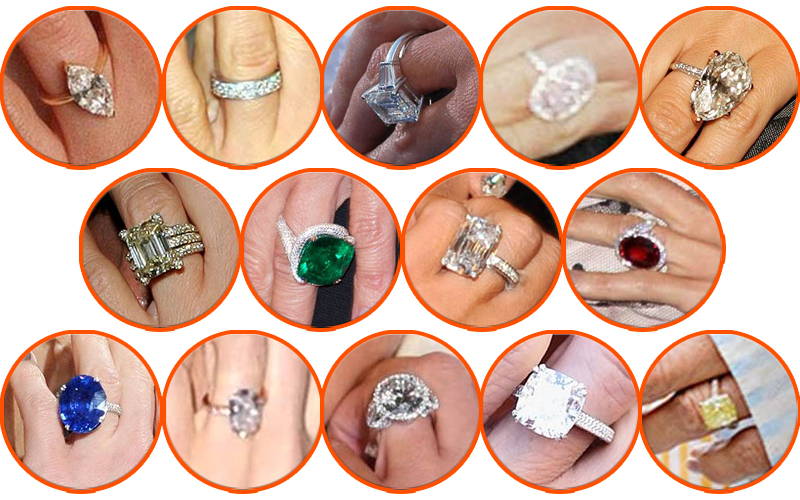 Victoria Beckham has a whopping 14 engagement rings and the amazing thing is … We're not actually surprised. If anyone were to, it would be old Posh Spice, wouldn’t it. She’s a Queen in fashion and her jewellery collection has to hold up to this title. Some are from David while others are treats from Posh, to Posh, because she can.

2003, Emerald shaped diamond with side baguettes, set onto a platinum band.

2004, David gifted Victoria a $1.1 million pink champagne diamond with a halo of clear diamonds, set onto a pavé band for her 30th birthday.

2005, David topped his own previous gift with a 17-carat pear diamond, set onto a pavé band.

2006, Her next ring was an emerald yellow diamond, enhanced by a yellow gold pavé band.

2007, Fancying a bit of colour, VB bought a cushion emerald with a platinum spiral setting and pavé band.

2009, An elegant oval ruby mounted onto a clear diamond halo and pavé band.

2010, A clear fan of precious gemstones, Victoria completed her gemstones set with a oval sapphire on a thin pavé band.

If there's any occasion in your life where you should feel like royalty, it's your engagement and wedding day. So there's no way we could miss out some of the most iconic engagement rings in history, whether they're British royalty, or Hollywood royalty. Take inspiration from these rings if you're after a fairytale happy ever after. 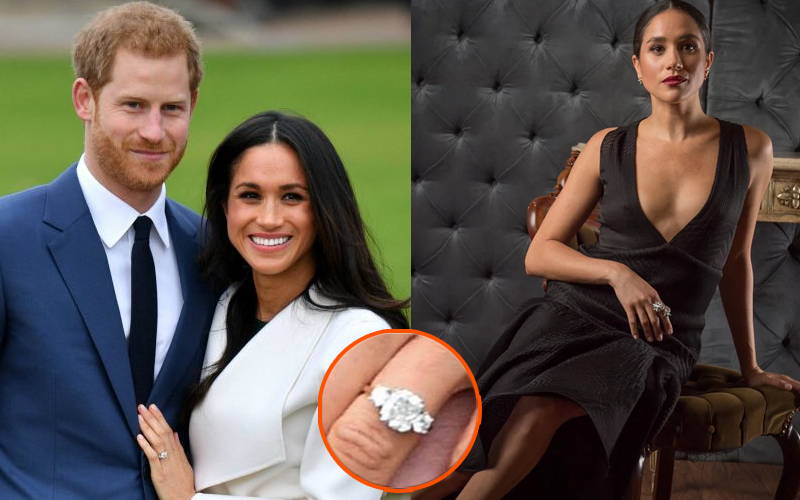 The ring - A 3.5-carat cushion centre stone diamond, with a 0.75-carat round brilliant diamond on either side. Meghan stopped wearing her engagement ring during her pregnancy and when it was seen again, the band had been updated from yellow gold to a pavé design.

The design - Prince Harry designed the ring himself, choosing a centre stone from Botswana, a “special place” to them, and two diamonds from Princess Diana’s collection.

Tip for proposing to a Markle fan - The 3 stones of a trilogy ring are known to stand for both the past, present and future, as well as friendship, love and fidelity in your relationship. 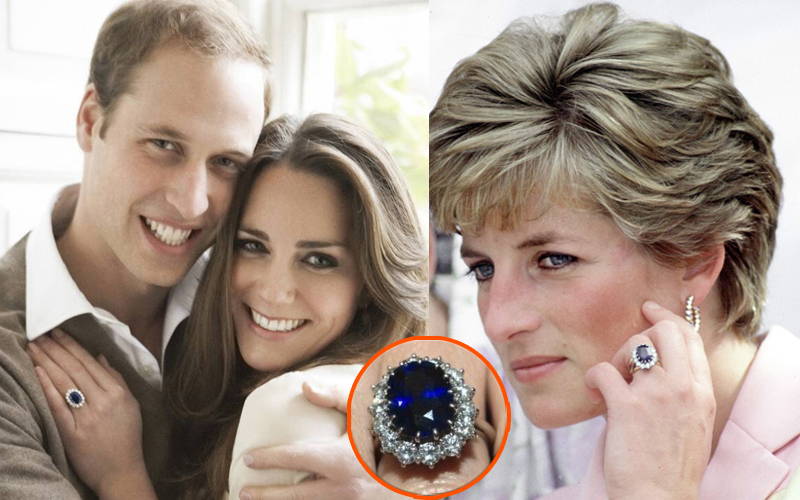 The ring - A Sri Lanken 12-carat oval blue Ceylon sapphire, with cut facets to draw in light. Surrounded by a halo of 14 solitaire diamonds and set into an 18-karat white gold band.

Price - The iconic ring was originally valued at £28,000 and is now said to be worth £300,000. Though if it were to ever be auctioned, it’s considered “priceless” due to its history.

The design - One of the world’s most famous engagement rings of all time. Unusually, this royal ring wasn’t a bespoke creation, it actually featured in Gerrard’s jewellery collection and Diana chose it herself. When William was proposing, there was no other ring to be considered. And the future Queen of Britain, Kate, has been spotted wearing the eye catching ring many times. 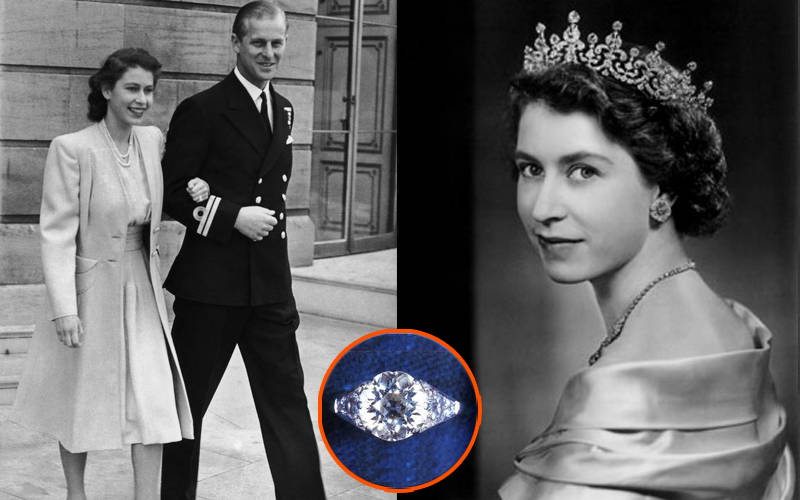 The ring - A 3-carat round diamond in the old cut design, with a traditional 8 claw setting, and diamond shoulders set into a platinum band.

The story and design - This stunning engagement ring has been on the Queen’s finger for an incredible 72 years and has quite a romantic story - Prince Philp’s Greek royal family wasn’t as well off as you’d think, his father left when he was young and Philip, his mother and his siblings were forced to flee his homeland due to war. So, when it came to proposing to Princess Elizabeth ||, his mother, Princess Andrew of Greece, stepped in and offered the jewels from the tiara she was given on her wedding day. Prince Philip designed the engagement ring himself, with the help of jeweller Philip Antrobus.

For the future heir to the British throne, the size of the centre stone was considered modest. But this fitted well with the personalities of both Philip and Elizabeth, the princess who saved ration coupons for her wedding dress and it’s thought that Philip considered the mood of Britain in the wake of WW||.

Tip for proposing to your future King or Queen - It’s not always about what you have, but what you’re willing to give and how meaningful you make it. Be like Prince Philip and make it sentimental with a bespoke design. A true representation of your love is a strong symbol, and one that’s going to get you a “Yes! - Till Death Do Us Part”.

Feeling inspired? Now you know what you’re looking for, head over to our engagement ring collection to find the perfect one for your perfect one.