HOW TO SNEAKILY FIND OUT YOUR PARTNER'S RING SIZE

Are you proposing but don’t know the right ring size? ... You've come to the right place.

So, you’ve gotten over the initial decisions that this is your Ride or Die one for life, and this is the right time, and possibly even chosen your ring. But, at some point you realise you’ve got to get the right sizing for the ring. It’s no good if they say “Yes!” but you can’t get the ring on their finger, or it just falls straight off. So, we’re here to help you get the right ring size on the sly.

Here’s what our experts say - 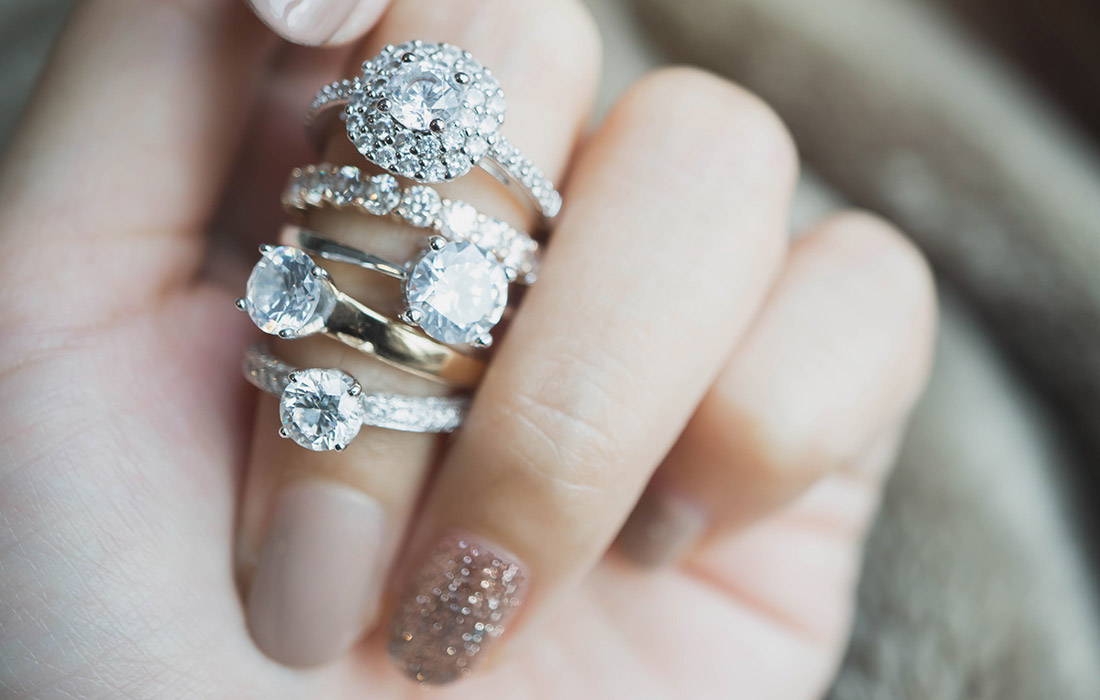 BORROW A RING OF THEIRS

Probably the most obvious, common and oldest answer to this problem is to take one of their rings.

Once you have one of their rings, you have a few options - 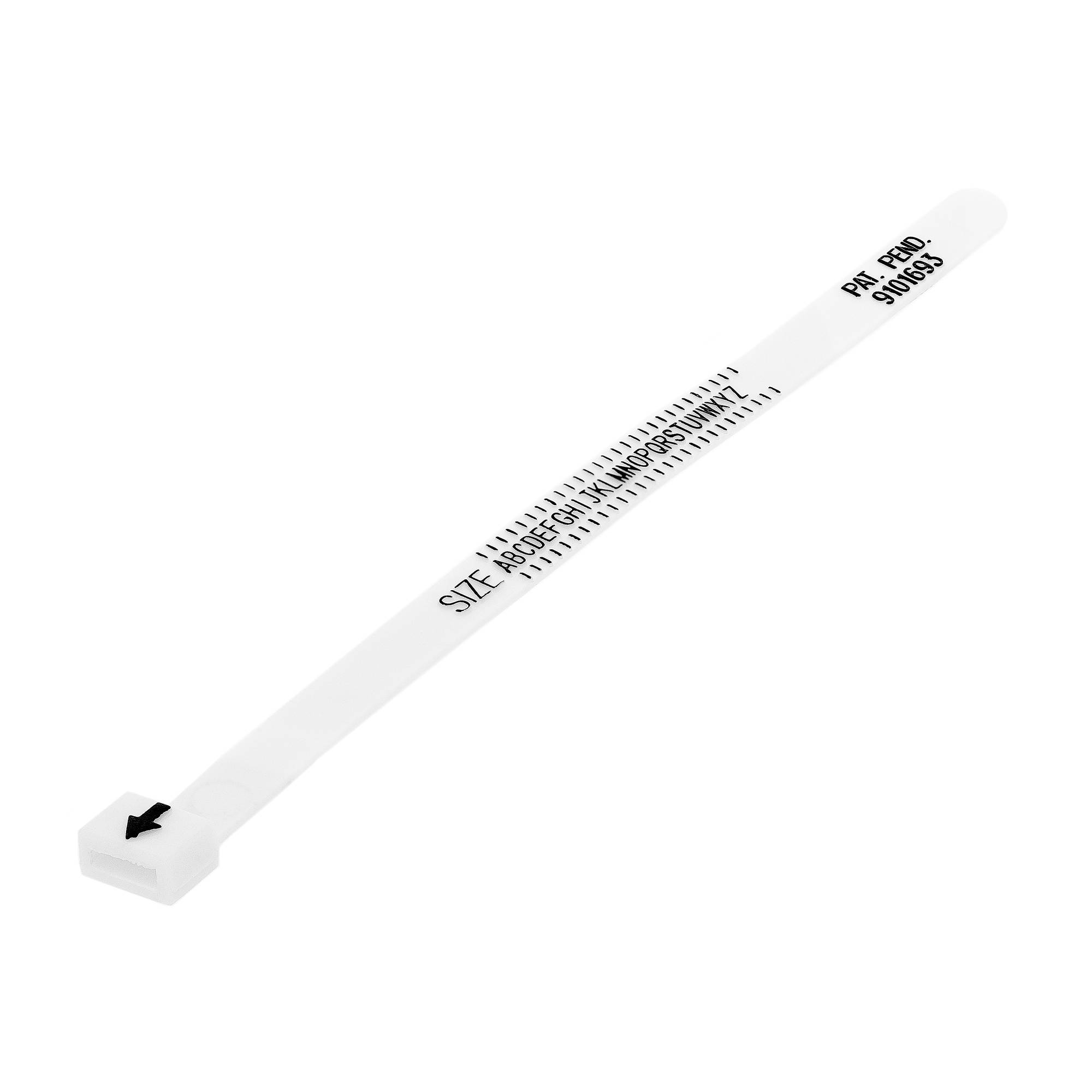 This is how your ring sizer will arrive 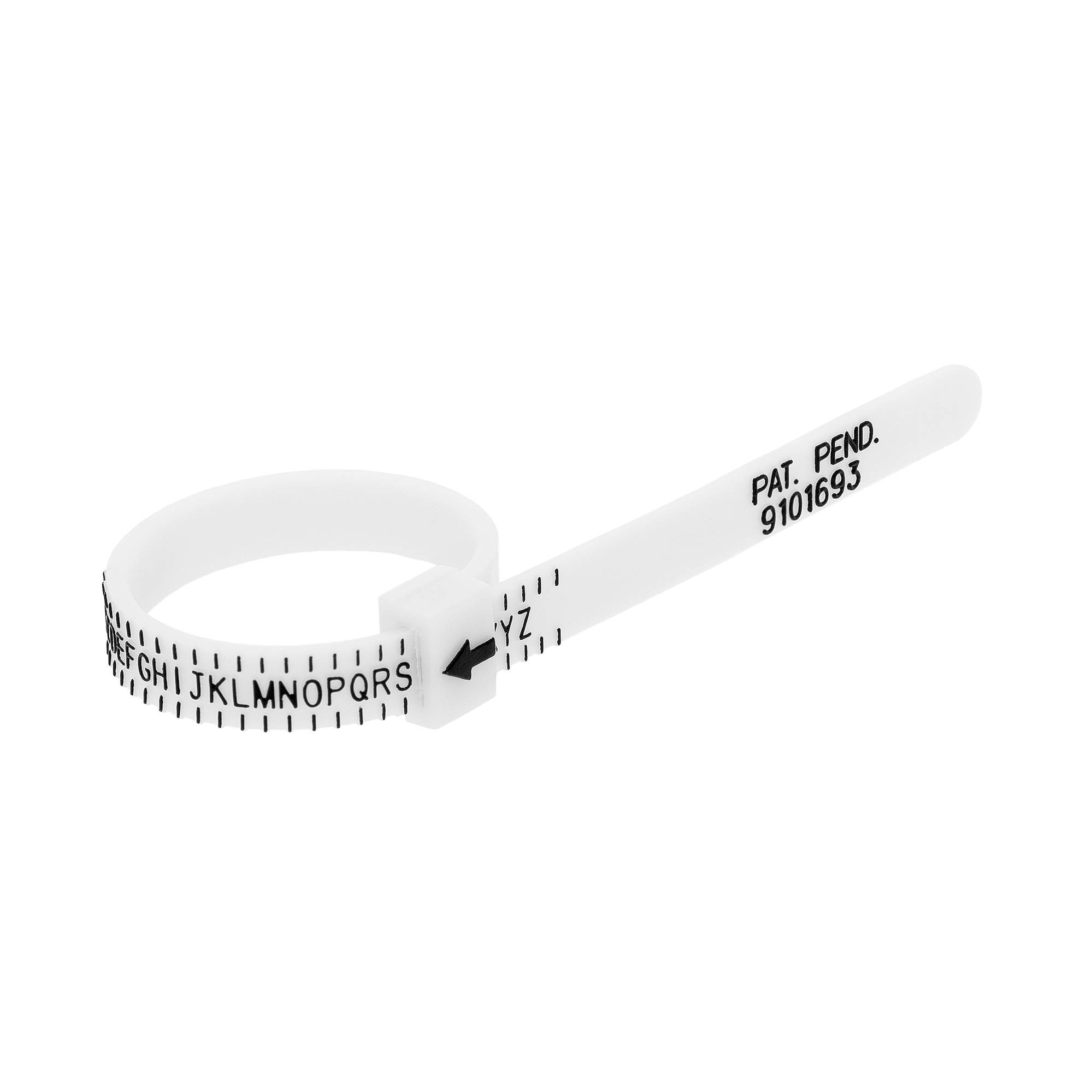 Thread the tail end through the loop, like a belt 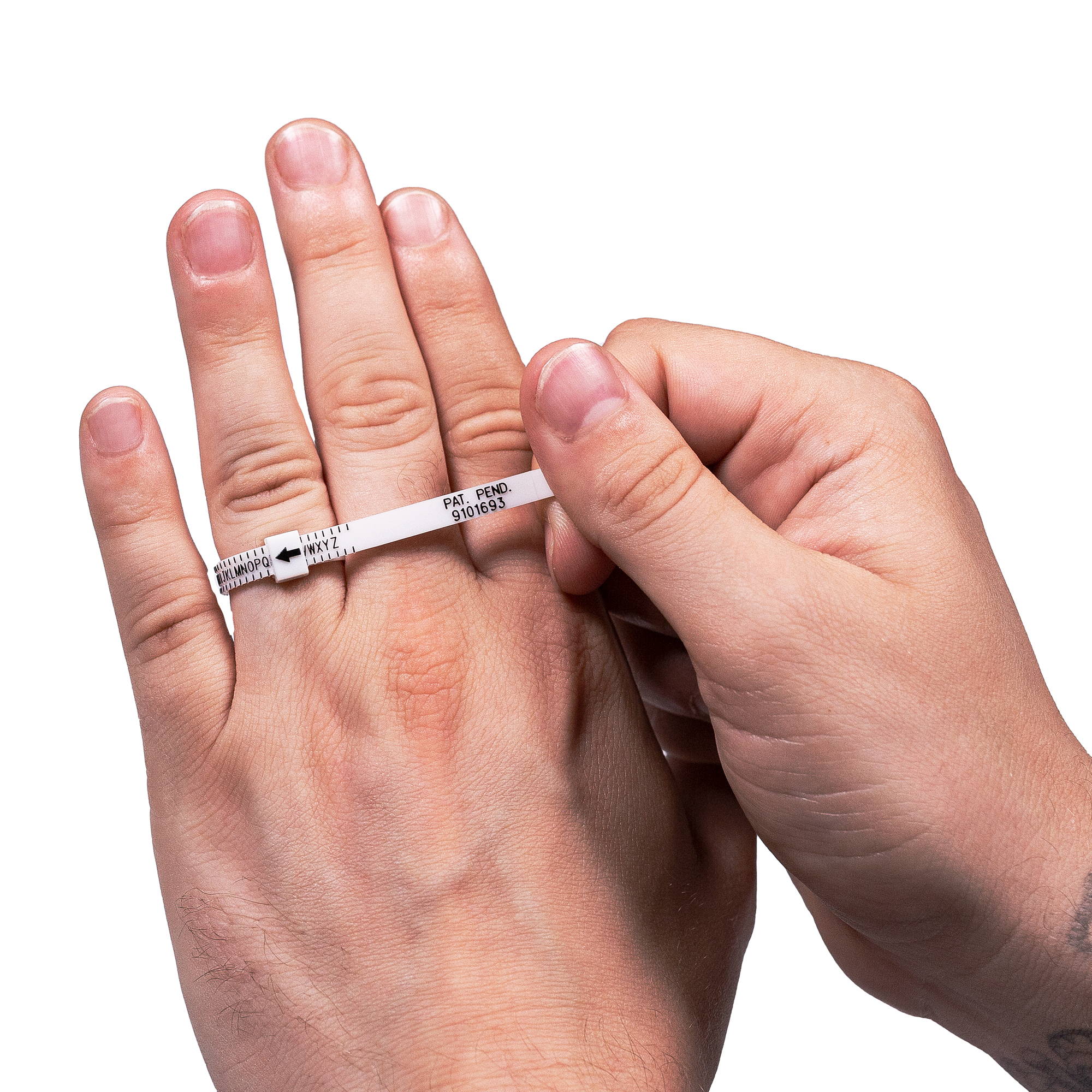 Place the sizer on your finger and line it up with the mark you made - Pull the tail until it feels snug, but comfortable 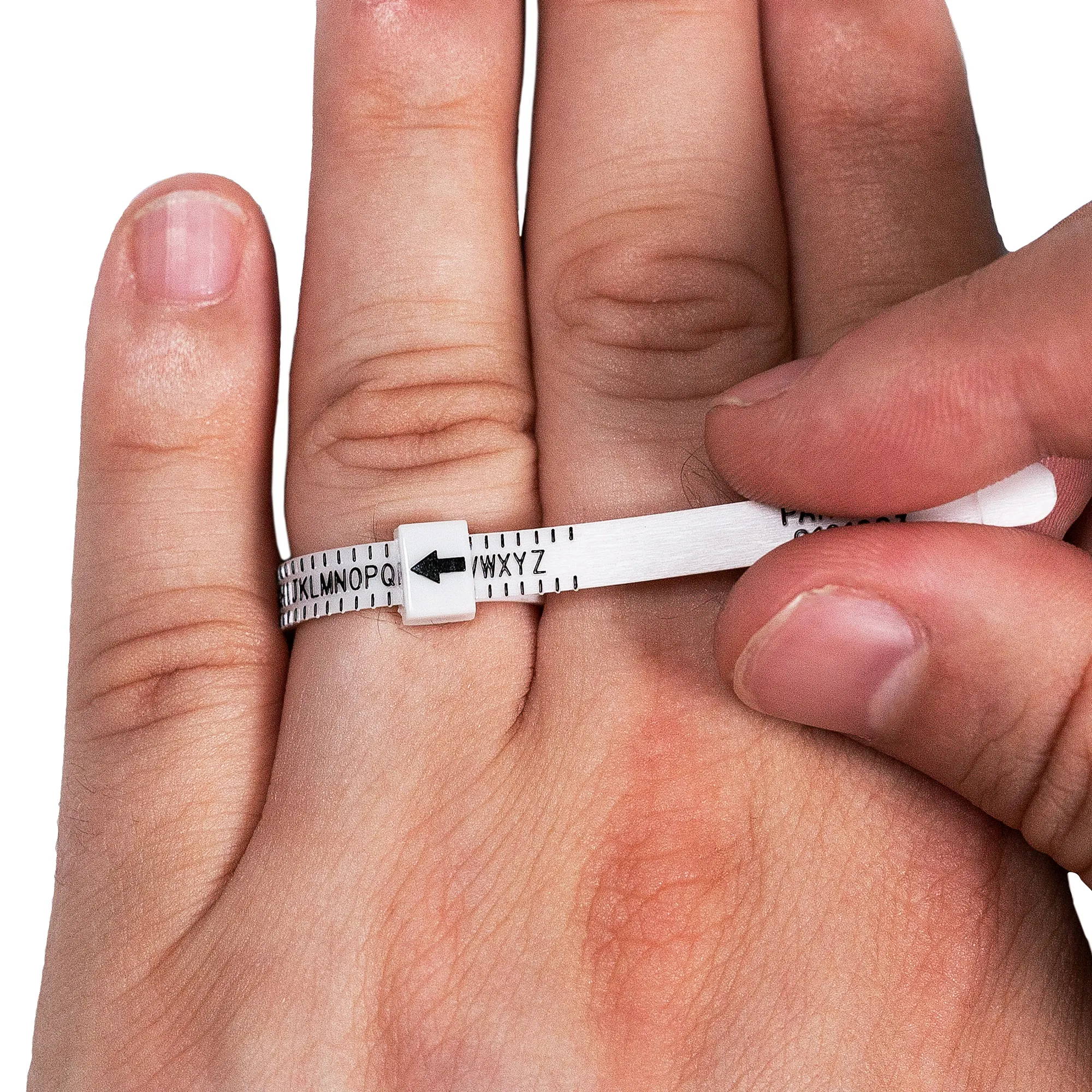 Note down the letter that lines up with the large arrow, or take a photo - This is the ring size.
...Now take it off, hide the ring sizer and wash the mark off your finger

USE A RING SIZER

We offer a free ring sizer, entirely free (you don’t have to pay for it, or the delivery, and there’s absolutely no pressure to buy anything afterwards, we’re just trying to help you out).

It takes around 3-5 days for delivery, so you’re better off waiting for the ring sizer to arrive before taking their ring (don’t need the hassle of a “lost ring”).

How to take the measurement: Wait until they take their ring off (Tip - Try when they're in the shower). Slip it on your own finger and mark how far down it fits with a biro pen (don't push the ring, you don't want it getting stuck). Then go somewhere they won't walk in on you and, using the ring sizer, measure your own finger at the mark.
If you have a bit more "safe" time, you could compare the ring sizer against their ring directly.

If you don’t fancy the free ring sizer, or want to double check it, you can bring their ring to us and we'll size it.

Not all your fingers are the same size. Just because it's their ring, doesn’t mean it’s the exact sizing. If they wear the ring on their other hand, or another finger, a slight adjustment will be needed for the perfect size. But if you can let us know which finger they wear the ring on, we can use this to estimate their size. 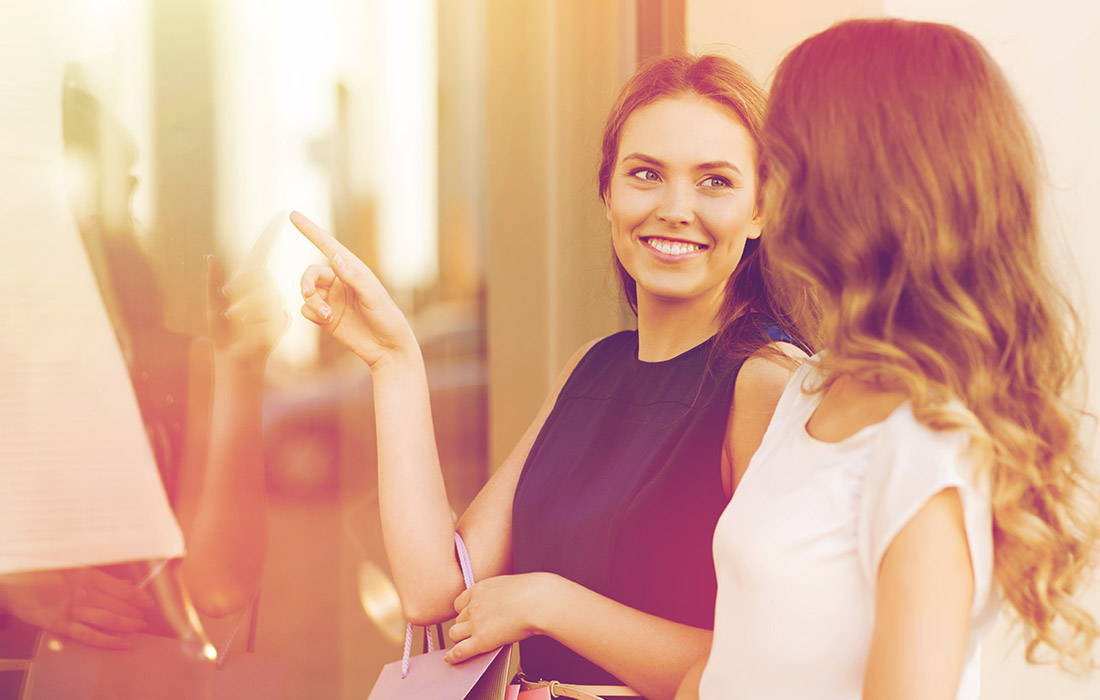 What are friends and family for, if not to help you out in these kind of situations?
Ask a friend (one who can keep a secret) to try and sly it into a conversation at some point. If they’re going out for a few drinks, they could ask to borrow the ring for the night (along with other jewellery, so doesn’t seem odd) and either use the ring sizer in the loo, or mark which finger it fits on and size their own finger the next day.

Or, you could get one of their friends or family to ask them to go shopping and try to casually suggest trying on a few rings. But unless this is a common thing for them, it’ll probably come across pretty blatantly. So we don’t tend to suggest this one. 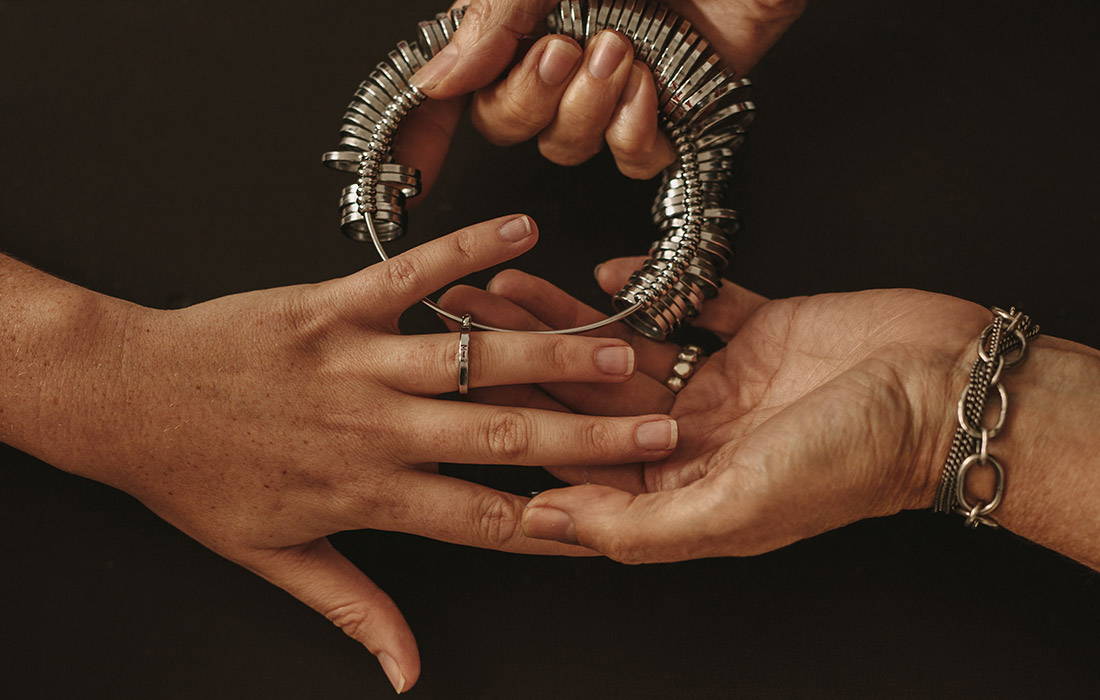 This one, like the one above, isn’t one we suggest really. Because, if they have even the weakest BS detector, they’ll figure you out within two minutes, or turn into Sherlock and start watching everything you do, look at, talk about, talk to, google, probably down to what you say in your sleep.

But, if you think you can get away with it, you always have the option of just asking straight up. It really depends on your relationship and communication.

How we’d go about it - If you’ve ever spoken about engagement before, start a conversation in the same way and then just casually say “I’ll need to know at some point and I wouldn’t want to ruin the surprise by having to ask, or trying to borrow a ring and messing it all up. So it might be better if I just ask now and then I know for when we’re ready”.

If you’re getting a friend to ask - Get them to play off the BFF status by starting a conversation about their friendship and asking some other measurements or personal details. Then have them talk about what role your partner and they’d play in your future weddings. Before saying “Well, I guess I better know your ring size. For if …(your name).. ever needs to ask. If I am your best friend, I’ll be the one to ask, won’t I?”

But to make this work, you and their friend would have be top-level sly. We’re talking double agent level.

Whatever you do, however desperate it gets, don’t do the following -

Never think you’re sly enough to measure their finger whilst they’re sleeping. You’re not. And that’s an awkward situation to explain yourself out of and they’ll probably know instantly what you’re trying to do.

Don’t take their ring for more than a few hours. If they notice it’s gone, they’ll be panicking and if you’re keeping your cool (because you know where it is), that’s just an argument in the making.

Don’t ask for help from anyone who can’t keep secrets or is likely to get too excited. You may think you know how calm and cool someone is, but if they think they’re the only person in the world who knows what you’re planning to do, they might surprise you. The news of proposals does something stupid to some people and they near explode.

Don’t take the size of their current ring for certain. Yes it might fit the right finger, or it might fit the same finger but on their opposite hand … This doesn’t mean that it’s right for the new ring. Tell the experts which finger they wear it on and if you can, take a photo of it, if not, try to remember it so you can describe it to the jewellers. Anything from thickness of the band, to shoulder settings can affect the size.

Ultimately, our best advice is to not stress about it too much. L, M & N are the most common 3 sizes nationally, and there’s not much between these. So, if you’re a bit off, it can be resized easily. Don’t risk ruining your proposal. Speak to us, we can help out by finding a ring that’s both perfect for their taste and easily resizable, if needed.